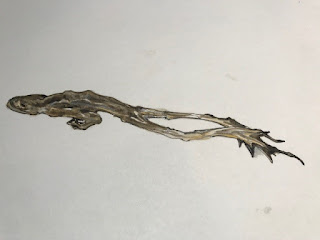 leathery thing found in the grass

where once it died and had its being.

Behind in flight those lengthy legs

across a mummy’s empty chest –

in supplication.  Your eyes

are closed as if at prayer.  Leap on

in faith my frog, and leave –

leave earth and water far behind

all forgotten, no longer needed

may I die like you in my own grass

January may be the start of the year: a time for looking forward to new events, new experiences – new life no less; but at the same time, that two faced god Janus peers backwards at what is lost, gone for ever, now dead.

An artist friend painted the frog I’d found. It may seem exaggerated, but it’s a realistic picture, almost photographic.

We were both struck by the definite deadness – the reduction to skin and bone, the distortion, dryness, deep furrows and constriction from the loss of internal organs which her painting conveys. But the extraordinarily extended legs and hind feet that have almost become wings combined with the lightness suggested a creature that could leap many times its own length, perhaps even take off and effortlessly fly, leaving our grounded elements far behind – no less than a picture of life.

So with the little frog carcass representing both death and the past and the vigour of the future – Janus himself – I offer this rumination at the beginning of our New Year.

Although inevitably as one studies a corpse, one’s thoughts turn to one’s own mortality, my poem isn’t morbid.  I remember how people sometimes kept a skull on their desk as a memento mori – a reminder not so much of the fear of death, as of the privilege and wonders of life. Along with an acceptance of mortality.

My artist friend is now dead, like the frog.  But somehow she survives in the many things she created, including a little water-colour of a frog.

And we – like Janus himself maybe – live on, able to look forward as well as backwards, as we travel into new life.