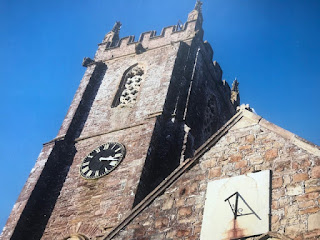 With June now behind us, there's a definite feeling of high summer.
Specifically, the sun's high and certain sun-related things come into their element.
Like sundials.
There’s a big contrast between the simplicity of the sundial and the complexity of the clock: the fine gilding of the one, and lack of any paint on the other, indeed a rust dribble; the many internal cogs, wheels and striking mechanism – the clockwork, no less – of the one, and the minimal two components of the other; the silence of the one, and the never-ceasing tick-tocking, every quarter hour being rung out from the other…

Both face south towards the town centre with its people bustling about their various businesses – the highly placed and visible clock where it may best be seen and heard; the silent sundial, generally unnoticed, lower down above the porch.

I felt drawn towards the sundial, attracted by its silence and simplicity.

I also wanted to see its inscription, expecting one of those aphorisms such as festina lente (make haste slowly), sine umbra nihil (without shadow, nothing) or even jolly old tempus fugit. It turned out to be no more than the names of the two churchwardens, both described as gentlemen, Joseph Tucker and Willian Karslake, with the date of 1710.  Whether they actually paid for the dial, or merely seized the opportunity to have their names and role recorded, I don’t know.  But in an interesting way the two surnames, still well represented locally (the present churchwarden being a Tucker) along with their date somehow carry their own message of time passing, mortality and continuity.

Such reflections were reinforced by the realisation that with July beginning, we’re now more than halfway through the present year, and time – all those minutes, hours and days – is passing, indeed flying, as the aphorism has it.  So I found myself thinking about telling the time – telling, as in finding out and saying what time it is, but also being told, along with telling, as in a story…

Still, as I stood there amongst the grave stones looking up under that bright sun, much as I appreciated the aphoristic feeling of those two names, complete with their being 'Gents' and the date, I would have liked a real aphorism.

You can tell the time

without a moving part

while time will tell

what may be told

assisted by an aphorism

time can tell you

what time you came

and when you went

so you will have your time

when you stand still

you yourself can tell the time

some time ago you had to learn

to tell the time

you were told to watch and wait

to take your time

who told it all before you

an upright stone can tell the time

as well as you

when you no longer have the time

to watch the shadow slide

without a moving part. 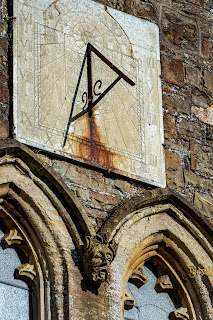 PS The head below the sundial is a particularly fine Green Man (please see my earlier blog of April this year) with his hair and moustache made of leaves and that characteristic rather startled expression which is quite understandable with all that greenery emerging from one's head and face.

September 01, 2021
Departure     Here’s a poem about what’s not here, well not here any longer – distinctive life in a particular form, now gone.   And how, aware of this inevitability, I felt and what I would have liked to have done.     Departure Standing here, I scan the sky a silent sky – uncut, intact. They're gone, those screaming slicers leaving an occasional ordinary bird along with a local gull or two and earth-bound me, still here who had a need to wish them well – to say goodbye, adieu, safe flights to wherever it is they had to go. But it's too late, and I am left now wanting to describe to you to you yourself, no longer here, the presence of this absence and the silence that's been left.   The poetic convention is that when celebrating/commemorating a person’s memory, you  head the poem ‘i.m.’, followed by their initials. But although it is In Memoriam. somehow I didn’t want to put ‘i.m. S.W.’ up there under the title, I think this is because the poem is about absence – wha
2 comments
Read more

Return of the Green Man

May 04, 2020
His wound-up crozier straightens out tightened springs unwind, releasing frondy fingers first, tipped with soft new nails followed by stalk of hand and wrist then un-stretched arcs of bramble arms thrown out to grasp and root. Keratin hardens, new limbs grow stronger from the making. He emerges phloem fed, hydrated by xylem strong-armed in lignin. Rib circled he inspires, his inflating body ready to break its bonds swollen with fresh projections. Leaves sprout from every crack jostling. They are drawn forth these unsuspected members to find themselves full of purpose and unruly. Renewed man is almost ready to take his leave once more, once he has learned to walk and take stock. Firmly rooted multi-limbed he advances when you’re not looking implanting his staff afresh he leaves the last one, leading the way to his rightful place through irrepressible growth. There are lots of Green Men – so ma
Post a Comment
Read more