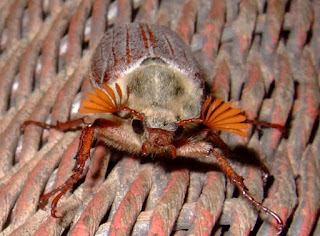 A large brown European beetle which flies at dusk and is a destructive plant pest, both as an adult and a larva.

Of course, this is no more than a dictionary definition, but it takes no note of the striking appearance, intriguing life cycle and the curious story of our relationship.

bracken clock, to tell me, show me

what is where and how and when

beyond my flat-head senses,

bulging black, that you borrowed

show you so much more.


My humbuz, it was almost worth

the miserable history of DDT,

near extinction, even once

found guilty by a court of law,

how much more you feel and sense

as you wave your ferny fronds,

how much more, dear snartlegog

than I with none.

Perhaps that’s one reason why the cockchafer – what a word! – has been given so many names. I particularly like its proper – I suppose I mean by that, its scientific – name, Melolontha melolontha (not even mentioned in my poem) with its unusual musical sound and repetition.

That latin harks back to the notorious occasion in 1320 when an Avignon court commanded cockchafers to withdraw to a designated area. Not surprisingly, they failed to comply.

Not that anyone needed a court of law to persuade them to kill this beetle whose voracious grubs eats plant roots for up to five years. Modern farmers have found more effective ways than the sentence of a court to reduce their numbers, pesticides almost extinguishing the cockchafer.

But with reduction in their use, cockchafer numbers are rising again.

I’m sure I wouldn’t want my potato harvest to be destroyed by a beetle. And I don’t intend to wax sentimental over a bug.  But with those marvellous antennae and huge eyes, one can’t help but wonder about the sensory input this creature enjoys, which we’ll never understand, however many names we give it.

Which is really all this little poem’s trying to say.

And with that, this beautiful beetle, whatever you care to call it, can fly away.