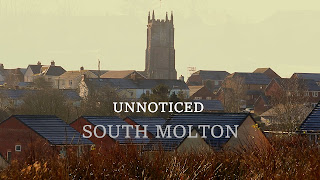 My blog this month isn't a poem – nor even several.

No, this time it's a set of little films of poems.

After sharing them with several of you, I apologise straight away if you've already seen them, but you might be interested to hear some thoughts on the matter.

And if you don't want to hear me thinking about making films of poems, just ignore what follows and go straight to the YouTube link.

I hope you enjoy the films. And please tell me what you think!

You may remember a couple of the poems appearing in past blogs, with me writing about the possible presentation of poetry in this way.

Time was when poetry existed solely as the spoken or sung word – it took some time for it to be written down.  Now, for the most part, it exists and flourishes in both these forms. Recently, and refreshingly, it seems to have been recovering more of its original orality.

Now we live in an increasingly visual age: we expect news to be accompanied by pictures, preferably moving; reality has to be seen to be, well, real. The mobile phone brings the illustrated world up close to each of us, while omnipresent television is the primary source of entertainment and information, providing for many an entire social matrix..

Such observations (interesting word in this context) are neither critical nor regretful – on the contrary, this acknowledgement and development of what has always been the predominant sense can only be enriching.

Poetry is naturally heard – but it can also be seen.

Some poems have a strong visual element in their own right, as they appear in written form. They need to be seen.

Others have a strong visual element from being closely related to – even inspired by – a specific place, object or person, when the visual clues are particularly relevant, as with these poems.

In such situations, film offers an added opportunity to reinforce or create associations.

Meanwhile film making for its part has evolved, radically and rapidly.

It wasn't long ago that you needed an expensive, quite heavy and bulky camera and some experience (at least), along with time and effort. Now with the mobile phone, which just about everyone now has, we can all easily make a film, at no cost, with no training, and 'broadcast' it far and wide, with minimal impact on the environment (no postage, transport, production, storage or other costs).

Through this medium poetry can find new life.  It can also be universally accessible and free.

There's something exciting about liberating the poem from its printed text, about making it instantly available in real time, as fresh as when it was originally spoken – complete with the speaker themselves, and/or a background or other context.

Who knows for how much longer poetry will be mainly presented through the medium of paper?

Of course, books – which I for one number amongst my most valued possessions – will be with us always, but the old way of sharing poetry through hearing and watching the words spoken looks set for a resurgence,