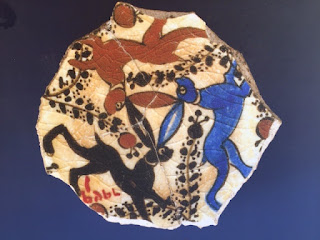 The turning of the year, with the various thoughts about the past and the future that come to mind, seems a good time to revisit the motif of the three hares.

And what a story this curious, mystifying motif has to tell, as it runs hare-like across continents, centuries and cultures.

Where it began, no one can be sure. Who first made it up, what it meant to that first creator, how it travelled, where else it is to be found and where it will go – all these are unknown.

What we do know, is what we see – an apparently simple image of three hares running round in a circle, joined by their ears: The Three Hares. But they represent a paradox. Each hare has two ears, as it should, but there are only three altogether. One’s eyes follow the hares, momentarily confused.

Of course, this is the nature of the hare. It jinks to avoid being caught – and with its nocturnal habits, unpredictable and often unusual behaviour and consequent rich folklore stretching back into ancient times, the hare enjoys a peculiar and significant status right across Eurasia. So no surprise that this fast-moving animal – not often seen, then when seen, not seen – might be the creature chosen for this motif.

After an original encounter with them in the roof of a local Devon church, three friends (it had to be three) spent over 25 years travelling ever farther in their chase. Across the south west peninsular, into Dorset, South Wales, Shropshire, Cheshire and North Wales, Yorkshire, East Anglia... the quest became an intellectual and aesthetic odyssey – initially unexpected, certainly unpredicted. It was as if the Three Hares – bearing in mind that hares are the creatures traditionally chased – had set the pursuers off, somehow capturing the three humans.

From continental Europe, where further clusters were to be found – via many adventures, curious coincidences and happy meetings (not to mention false trails), they discovered Three Hares as roof bosses, decorating medieval manuscripts, lit in stained glass, imprinted on tiles, carved in stone, cast, hammered into metal, embroidered, painted – even stamped on a bell high up in a tower.

The journey continued, as they discovered that the motif had been embraced not just by Christianity, but also that there were Judaic, Buddhist and Islamic Three Hares. They seemed to have followed the Silk Route – by joining the dots, a line can run from medieval churches in Devon, to caves in Dun Huang in China on the very edge of the Gobi desert, almost six thousand miles away.

Imagine a thread weaving its way between mountain ranges, across deserts, linking ancient cities, through Ladakh, Afghanistan, Iran, Turkmenistan, Russia and Ukraine, as well asSyria, the Levant, Sicily, France, Germany to our own islands, and beyond...

What a powerful idea, that can appeal to so many people of so many cultures and religions, to be used and re-created for over 1,500 years!

As to the meaning of the Three Hares – as is the case so often with poetry as well, no one should tell you what to think. Perhaps this is part of what they would have us learn, and perhaps this in part explains their universality and wondrous survival skills…

But, for what it's worth, my poem says something of what I think and feel.

I love the representation of joining and sharing, even to the point of sharing senses; the realisation that leading can be following, and of course vice versa; the consideration of the elision of past, present and future – of time and motion, and the revolutionary nature of life itself...

I could go on and on – like those hares – but the (paradoxical) simplicity of the motif reasserts itself. That's really all we need.

As for the poem, I've tried to reproduce – perhaps even be inspired by – this trinity of creatures, with three verses of three sets of three lines, with repetitions, unexpected breaks and joins – and no capture.

Best to leave it at that, except to say that I'm sure there's a definite message from them to us.

I share the hares' wish in the last four lines, as we go – perhaps running – from a past year into a new one. May it be a happy one for you, and those we're joined up with. 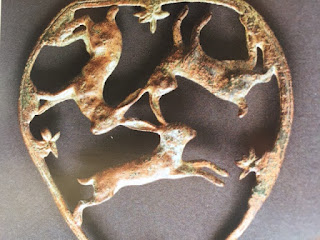 Photos by Chris Chapman, to whom many thanks