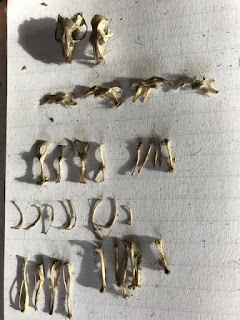 So this is what I’ve ended with.

A set of skulls upon my page –

which rest on their incisors.

The pack was black, tight-packed

but as I pick the pack apart

femora from a miniature dinosaur,

a mandible with its row of molars

here’s another to lay alongside –

all these little light-weight bones

bone-white and clean after their sojourn,

a burial of sorts, I find no trace

to protect a delicate throat

All that remains of once warm mice,

shrews and voles, has been gathered up

and rearranged upon this page.

I draw close. That which was rejected –

this dusty debris, this residue

by my own breath. 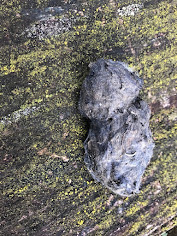 Not just for what they contain – more of that in a moment – and the way they're constructed so as not to scratch the owl's gullet with their burden of little sharp bones, but it's their non-smell, their simple cleanliness.  After all, they look like a turd, and as they're representing the unwanted residue, you'd assume they'd smell.

But they don’t, they’re soft yet firm, streamlined and intriguing.

Paradoxical things then, that invite being taken apart.

And inside that fur coated pack, all those bits and pieces, now all jumbled. 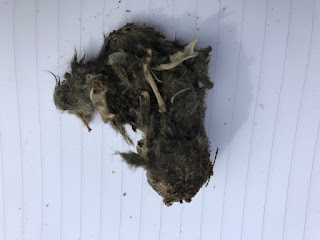 But they also make me want to put them back together again...

So I find myself teasing the bits and pieces out, thinking about what might constitute a set and then gathering them, which I must have done lots of times, but here I go again...

Of course, one could never reconstruct an entire little skeleton, try as one might, but once again here I am assembling bones, like an amateur dinosaur re-constructor.

Perhaps many creative activities are little more than rearranging what you've discovered – making new patterns, re-assembling in a fresh way, that might seem original...

As I pored over these interesting fragments, placing them very carefully on a clean white page, wondering what might belong to what, then changing my mind and moving things around, poetry was not on my mind at all.  Actually, I don't think I was thinking of anything, being subsumed in this little activity.

But thinking about it later, it struck me that it was like writing poetry.

So I share with you a little poem about little things, which comes in little verses of short lines – a description of a pointless exercise which nonetheless absorbed my attention, even though I'd done it before and knew it wouldn't come to very much.

But whether or not, and how much, it's original – whatever one means by that, and much as I would wish it to be – it was my experience, and my breath that momentarily moved the residue...

Well, there are lots of pellets on the barn floor, so I'm sure I'll take another one apart before too long. 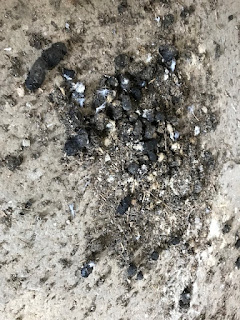