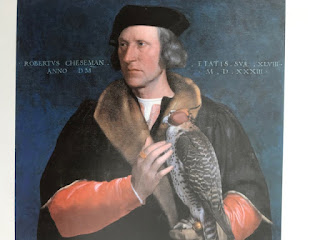 Being almost square, this Holbein portrait is unusual, but there’s more that makes this particular one special.

The life-likeness of a man who lived some 500 years ago; the wonderful textures and freshness of skin, feather and cloth; the intriguing composition and disposition, creating that powerful sense of expectancy, awareness of things about to happen…

The man’s attention is drawn outside the picture – he’s watching and waiting. Waiting for something to appear, some other sort of development, a request, an order even?

And, although hooded, so is the falcon, which unable to watch, simply waits.

Robert Cheseman served his master, Henry VIII as his representative in Middlesex.

Sometime after this portrait was painted, he was called upon to go to meet and bring Anne of Cleves to her husband-to-be – an unproductive foray it turned out to be, but that’s another story.

(Although interestingly a portrait played an important role in that episode).

Robert Cheseman for his part was the master of this falcon, as is evident in the painting.

The gyrfalcon was the most valued of all falcons, being especially linked to royalty; it was associated with and cherished by the doyen of all Europe’s falconers, the Holy Roman Emperor Frederick II.

But enough history. To the portrait –

Comfortable upon fur and close to a heart

a future horizon of preys and powers

of potentates and pleasures of feathers,

Soon enough off comes the leather

Both will fly to their duty, and return

with their master’s prize.

And what a portrait this is, with all its complexity!

There’s an ambiguity about the set of the mouth – are these the lips of a hard man, cruel like his own master? – and are those possibly gentle fingers simply stroking, about to restrain his creature, or to send it forth?

So much is shown; so much unknown.

But we can reflect upon the artist’s skill – the side of the face and the upper surface of the bright pink sleeve’s satin dramatic illumination, the softness (and similarity) of the man’s hair and the bird’s feathers so beautifully represented.

Above all, the freshness and immediacy of the portrait, which being a double portrait portrays relationships, not just that of man and bird, and of vision and blindness, but also of closeness and intimacy, power and control – of master and servant.

Along with past and present, present and future.

And there we must leave them in their then present, each awaiting what was about to happen, what was to come… 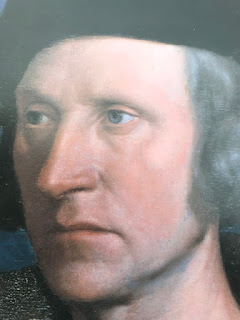