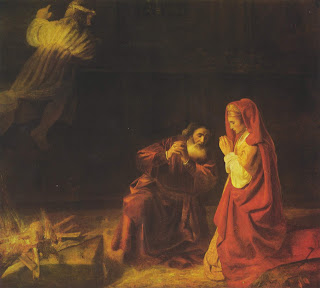 Here's a strange story – on the face of it, nothing to do with Christmas, but in a strange way it is.

And this Rembrandt's a strange painting too – all the stranger, for disagreeing with the story as told above... but more of that later.

I never heard him come –

in an instant, he was here

The Stranger, with his message.

He declined our food and drink

and refused to say his name.

I would not understand

but knew and bowed my head.

When I looked up again

to try to learn some more

he was no longer there.

I never heard him go

The Stranger, with his message.

An unnamed infertile woman is visited by a stranger, also an unnamed person, who turns out to be one of those strange creatures identified as angels. A second strange encounter follows, this time including her husband (who does have a name) ending in the two of them terrified. She becomes pregnant, and gives birth to the strangest of sons, who can only be called superhuman.

One of the many interesting ideas this story raises is the role anonymity plays in creating A Stranger.

Manoah has a name and is no stranger; nor is his wife, whose name we don't know but being called  Manoah's wife, in that distant patriarchal society, is sort-of named. The visiting stranger is however anonymous, and insists on remaining so.

There's also the role that offering refreshment, in welcoming and thereby familiarising the stranger, plays – this visitor firmly turned it down, thus preserving his strangemess.

Strangers can frighten. The more so, when we don't know who they are, especially if they refuse to say, and decline our food and drink, even if – or perhaps especially if – it seems they’ve come a long way, and there’s a particular reason for their coming to us, like bringing a message.

The story is quite clear in its description of how frightened the couple were, throwing themselves on the ground. Yet Rembrandt shows us a composed woman serene in her praying, with her husband equally unfazed, simply turning away slightly from the heat of the fire.

As for the angel – he looks like an ordinary wingless sort of fellow, who having made a jump, is more interested in where he's going to land, than doing angelic things like gazing heaven-wards.

Certainly not someone to make you want to throw your frightened self on the ground.

So the way Rembrandt decided to represent this episode, so different from the story, strikes me as strange.

It looks like angels may come in many forms, but perhaps they're always strange, if not strangers, even if they look a bit familiar.

(I just noticed that angel is almost completely contained in stranger).

There it is, a strange story indeed, but one that crops up more than once in these ancient tales, and while it isn’t a Christmas one – another strange story, however well we know it – it has at least one shared character…

Well, whoever you find yourself visited by this Christmas, may it be a happy one.