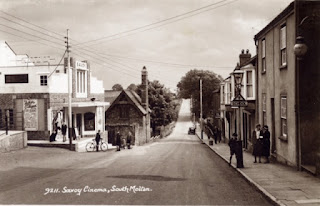 South Molton’s cinema, The Savoy, stopped showing films in the 1970s, and after a long period of dereliction was finally totally demolished some twenty years ago.  The site lay bare for ten years before houses were built on it.

Just here it was

I’m sure a cinema

a name from romance

to capture your heart

both shaky and still

hands held in the dark

meet on the steps

queuing to see something

I know it was here

the frames told the future

what was coming tonight

and tomorrow next week

did we wake up to find

it was all of it gone

this palace of dreams?

Progressing into a new year brings thoughts about the future, and the past – what lies ahead, and what's gone forever.

Here's a good example of something that was once important which is now completely lost.

I don't mean to get sentimental. This small-town cinema was little more than an asbestos roofed barn, behind its attempt at an imposing facade.  It had stopped showing films before my time. And no doubt it had got pretty run-down before then.

Nonetheless, once upon a time it must have played a major role here with its ability to transport local people – quite a few hadn't travelled farther than Barnstaple – to some pretty exotic places, before the age of television (which must have been one of the main reasons for its disappearance).

Films are as powerful now as ever, and if anything even more widely enjoyed; cinemas have reinvented themselves. Ours is predominantly a visual culture. So we see (see!) newspapers turning into images on a screen (even if it's a tiny individual one), games taking the same route and all of us, adults and children alike, learning how to do things – as well as finding our entertainment –  by watching what are in effect little films on our own screens.

Maybe this is a, if not the, future for poetry too. Watching and hearing it makes it immediate and live, true to its origins. So this new year will see me for one working out how  my own poems may be presented in this medium – perhaps even offering this poem as a little film.

So, looking back, looking forward, the South Molton Savoy (love the alliteration!) may have vanished – that's what happens to palaces of dreams – but welcome to videos, now so cheap, easy and accessible.

All of which adds up to some pretty impressive advantages over the printed word, hard copy and books.

But I still think it's a shame that our very own Palace crumbled, then vanished... 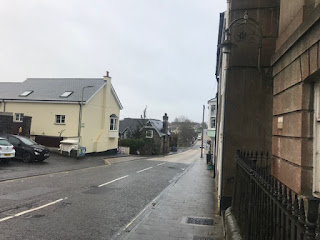