And a Little Jade 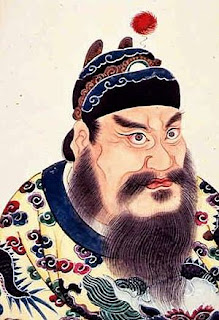 This ferocious ruler, coming to the throne aged 13, was the first emperor of China. Qin Shi Huang Di lived through troubled times – his family history was extraordinarily turbulent, with  assassination attempts and dreadful retributions, and huge numbers of people killed judicially and many more lost on gigantic projects, such as wall and canal building.

But most remarkable and memorable of all is his huge mausoleum with its army of terracotta soldiers which thousands of workers began constructing early in his reign.

This colossal vanity project bears testimony to his omnipotence along with his concern with death and what it may bring.

Qin was said to have despatched hundreds of young men and women in search of the elixir of eternal life. They were never seen again, only too aware of what the tyrannical Qin’s reaction would be if they returned empty-handed.

Exactly how Qin died remains controversial, but it seems a preparation of mercury was the cause of his death.

It isn’t difficult to imagine how the apparent vitality of mercury – that fluidity, unpredictability and mutability as celebrated in its name of quick-silver – might be thought to bring its own attributes of eternal life to such an obsessed emperor.

And the other constituent of his elixir, jade – the heavenly gem, eternal and mystical – brought its own special qualities.  Not only was this precious mineral associated with imperial ritual, but as it was believed to be indestructible, it was thought to impart some sort of immortality. Jade objects were often buried with the (rich) dead, particularly in the form of intricate burial suits.

So Qin killed himself in the very process of striving for immortality.

Why write a poem about him?

Qin’s story, with its terrible self-fulfilment, has a powerful drama. Poetry allows the telling of it as if it’s just happened. Who knows – and does it matter – how ‘true’ the story may be? Poetry can take liberties in bringing it all to life – (that life again!) – even though thousands of years have passed.

Of course something like this would never be allowed to happen now.

But I remember prodding a shining drop from a broken thermometer, breaking it into those mini globules, and then rolling them back together to see them magically restored into one again.

What power in a finger tip!

I was never tempted to swallow it, but as I read about Qin and his obsession, I began to understand something of his fascination, the crazy logic of drinking that elixir and even started to feel sorry for him – although how he ruled makes Peter the Great seem like Edward the Confessor.

And as his story continues to be told, and more is learnt about him, perhaps he has after all achieved a sort of immortality?

An earlier version of this poem was published in the anthology New Contexts 1, published by Coverstory books