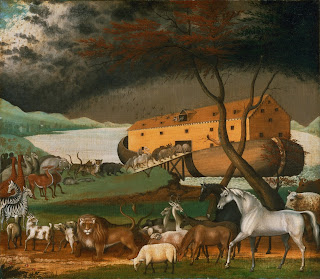 I find myself attracted to certain words, and here’s one.

Not a word often heard in modern speech, but perfectly proper and well-used since at least the sixteenth century. I came across it in Seamus Heaney’s Section 3 of Keeping Going in his phrase – We were all together there in a foretime.

I imagined hearing in my mind’s ear his attractive rich voice rolling it out.

Not just, or simply, the past, but a foretime.

Fore, from before, so it is of course the past, but with a slightly different twist – an added dimension arising from the other words which use fore, as in forecast, foretell or even forehead, when it somehow also looks ahead, to the future… what lies before us?

be all that as it may, we’ve been here before, it affected us all then, it’s doing the same now and it’s threatening to overwhelm us in the future.

There are times a cataclysm's

neither rough nor quick –

it creeps up on you

when you're not looking

as those waters rise

across the deck a feeding bowl

slides and spills its grains.

We have enough for man and beast –

those housed beasts.  I shift my weight

from one foot to the other

as timbers tighten then kick the bowl

It's upside down. We await

the promise of that gentle lift

and what may come to pass.

We tip, then level – settling down

before we rock the other way.

The bowl returns.  The grains remain

and I regain my balance.

Below my feet the hum of life

I look away again across

There have been plenty of dramatic manifestations of the effects of climate change this summer, with unexpected fires and sudden floods – and more.

But at the same time, catastrophe can emerge in slow motion.  The thermometer creeps upwards in tiny increments; mostly unseen and almost unnoticed the ice melts and the seas slowly rise.

It must have taken a long time for the waters to float Noah’s ark. So I imagine him focusing on the immediate and what was close to hand, or here, to foot.  What else could he do, but kick a stray bowl, listen, watch and wait?

Extraordinary as it seems, the story of that unique fully-provisioned vessel packed with a pair of every living thing and its epic journey somehow retains shreds of credibility. Certainly, many have believed it – perhaps still do.  Maybe all those pictures recalled from wayback in illustrated bibles and children's books played their part?

Some have searched for – even decided they’ve found – his ark's landing place, and others have set about constructing a facsimile, following the prescribed dimensions.

Whatever... it's not totally impossible to imagine, perhaps even identify with, Noah: if we want, we can be there with him.

Then we were (are?) all together there in a foretime.

He, his family and his creatures great and small survived.  Let’s hope we too can be together in an aftertime, as we were in a foretime.