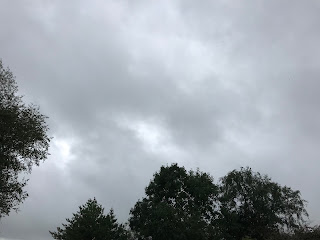 Here’s a poem about what’s not here, well not here any longer – distinctive life in a particular form, now gone.

And how, aware of this inevitability, I felt and what I would have liked to have done.

Standing here, I scan the sky

They're gone, those screaming slicers

along with a local gull or two

and earth-bound me, still here

who had a need to wish them well –

to wherever it is they had to go.

But it's too late, and I am left

now wanting to describe to you

to you yourself, no longer here,

the presence of this absence and

the silence that's been left.

The poetic convention is that when celebrating/commemorating a person’s memory, you  head the poem ‘i.m.’, followed by their initials.

But although it is In Memoriam. somehow I didn’t want to put ‘i.m. S.W.’ up there under the title,

I think this is because the poem is about absence – what (and who) is no longer heard, no longer seen – so even the dedication finds itself missing.

And I wanted to give the poem a wider focus: it’s about Simon, but more besides.

Anyway, I haven’t named the swifts, and therefore it feels right not to name the man.  He happens to be my absent (I can’t bring myself to call him departed) brother.  And whose initials also happen to be how swifts start off…

(All those S sounds – I’ve just counted seven words starting with an S, in the first three lines…)

Much as I love them, I hesitated to write about swifts.  Along with various other birds – possibly blackbirds, certainly swans and of course nightingales, they’re at risk of being overwritten – what can I add?

As for the swifts, I obsessively look out for them at the beginning of May, noting and comparing the date with previous years.  And that welcome is counterbalanced by my need to bid them farewell, when I keep searching in mid-August evenings for those last few.

Yes – there’s still one or two.  And then, no – definitely no more.

Swifts have to be some of our noisiest birds, and Simon in his way was a human equivalent – voluble and vociferous: not much silence when he was around, with his obtrusive presence.  So there I was in late August (when his birthday happens to fall) conscious of his absence, simultaneously with, and probably brought on by, a realisation that the swifts were no longer here.

But as with the swifts, his departure was predictable and expected.  He had to go; we had to be grateful for what he and they had brought to us.

I like the idea that a leaving calls for an arrival.  The swifts go, have gone, somewhere – in a way, they’ve returned. And with August going into September, there’s a feeling of fresh starts and new years beginning.

My dog can’t understand saying goodbye, though I’ve often wanted him to.  Goodbye signifies an imminent absence, a different future.  He definitely lives in the present, though there’s a certain ability to remember, if reminded.  So he’s very good at welcoming, saying hello in the present tense. And doesn’t need to – perhaps just can’t – say goodbye. No doubt there’s another thing here I can learn from him.

As for me, I’ll end on a positive note, knowing that the absence of those screamers is only for a while, that I can look forward to welcoming – and once again noting the date of – their return. And I can still try to describe things, even if Simon isn’t around, and won’t be coming back.

In the meantime, us ordinary birds can get on with life, and be happy to be present.

Anyway, maybe a bit of silence is useful. 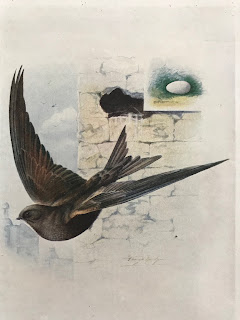