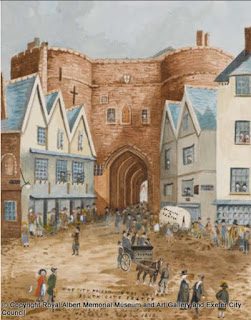 The time has come, Master Samuel

for you to ride in an open cart

from this old gate to Magdalen Road.

in windows.  Others stand around

in front of shops with thoughts

of dinner, and your imminent end.

Soon you’ll have gone and they

will turn, return to everyday life.

Some may talk tonight of what

they saw, or thought they saw,

while shadow creeps across

the city prison.  The children

may be told of that which comes

to a forger, Master Samuel, who

must leave for this last time

the warm pink gate in an open cart

pulled by one tired horse, past

a modest crowd, a covered wagon,

a curious shopper and

As I said, it's an unremarkable painting* in many ways – an Exeter street scene from the early nineteenth century, people going about their business, talking and watching, as they always do – presented in an appropriately naïve style.  In the bottom left hand corner stand a man and a woman – his attention possibly captured for a moment by the small crowd following a cart just emerged from the archway, while she seems more interested in something else altogether.  Others simply carry on – a well-dressed pair of gentlemen in the centre foreground appear to be engaged in some important conversation, and there's a fellow walking in the opposite direction away from the cart, towards a child.

Whether more people than usual are gathered at their windows is hard to tell, but the general impression isn't one of a special occasion: not a soldier or armed official to be seen, no sense of fuss or bother, the carter quietly turned towards his horse and the pink stone of the ancient south gate gently glowing.

Yet these are the last moments of that small figure in the cart, shortly to be hanged in public.

How much he made from his forgery, how it was done and subsequently discovered, I do not know.

What I am struck by is the apparent unquestioning acceptance of the dreadful sentence about to be carried out, with no one expecting any challenge.  An official or two sits comfortably enough alongside the condemned, as they trundle towards the waiting gallows in the street. Otherwise, life goes on.

In some ways, 1818 doesn't feel that far away.  Those were not barbaric times – this was the year Shelley wrote Ozymandias, the metric system had been invented and adopted in Europe, Beethoven was composing his Ninth Symphony and a network of new roads and canals was transforming England.

Yet here we see a local man about to be hanged – garrotted, strangled, neck broken – in front of anyone who might be around, on a sunny day in a beautiful, well-behaved cathedral city.

I can't help wondering about the source of the prosperity of the conversing gentlemen.

Maybe they were rich farmers, new industrialists or professional men – perhaps even lawyers, who might have prosecuted in a forgery case. I'm sure they would never have been forgers, but who knows whether their wealth may not have been won in far worse ways.  They at least will be able to continue to enjoy their discussion for as long as they wish, perhaps presently to have a pleasant dinner together.

As will you and I, who live in far more civilised times...

*Visit the RAMM website to see it in more detail