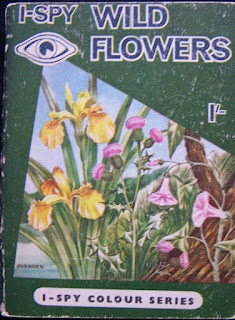 On the Farm, Musical Instruments, The Sights of London, On a Train Journey, At the Seaside, Dogs… so many I-Spy books, covering so much of my childhood.

I wish I’d kept at least some of those little matching booklets with their distinctive triangular visual representation of what the eye might spy on the cover. Good Hunting, rendered into simple gobbldygook by shifting a few letters to create the impression of a secret code, was the motto/watchword, which linked with the idea of being a member of a tribe that was headed by Big Chief I-Spy, no less.

The News Chronicle and Bouverie Street where you sent your completed booklet to receive a special feather from the Big Chief all trigger memories, but powerful as the nostalgia is, that's not the theme of the poem that follows.

The boxes are empty –

with your bright little eye, what will you spy?

Some things are worth very little –

Gound Ivy trails in the grass of the hedgebank

Some things are worth more than others –

Bugle is common in springtime by roadsides

also in woodland and field –

Some things are worth less than others –

in gardens and wasteland alike –

Are those boxes still empty –

with your bright little eye – what have you spied?

Some things have in-between worth –

Yellow Archangel may be sought for in copses

hedgerows and places in shade –

Some things are worth a lot more –

Some things are worth slightly less than the last –

Self-heal by the wayside and in pastures

abundant in all grassy places –

Now which boxes are full – how much is your score?

With your bright little eye –

so you know what’s worth what… perhaps more?

I can of course understand why some wild flowers are less readily seen than others, so spying them should attract a higher score – though it does make a difference where (and when) you find yourself.  If the challenge is to search for and find, with some of the sought-after being harder to spy, then it’s reasonable to recognise this persistence with a higher score. Perhaps it was in the In the Country booklet that a working windmill – rare even in my childhood – gave you a lot of points. All fair enough.

But I find it interesting to see how strong is our need to use numbers to evaluate.

Worth is measured – a number appears and a ranking results.

This may be necessary. The recently much-debated Biodiversity Net Gain metric attempts to assess natural value (or loss of) for a particular habitat by generating a number. Important and well-intentioned as such procedures are, they run the risk of oversimplifying even as they evaluate.

But to return to I-Spy Wild Flowers.

Here we can spot (spy?) a hierarchy being established, not just for the objects that were spied – the red dead nettle and creeping ground ivy, lovely as they both are, being demoted to little worth – but amongst the observers themselves.

I’ll try to avoid the risk now of becoming portentous, with the temptation to make remarks about man’s need to measure and our capitalist society, but my poem is asking how valuable is our approach to, and the whole process of, valuation?

And how much – another question that I recognise invites numeric scoring – is missed when we emphasise the rewarding of the finding of the pre-defined and the sought-after, rather than the stumbling upon and cherishing of the unmeasurable and unexpected?