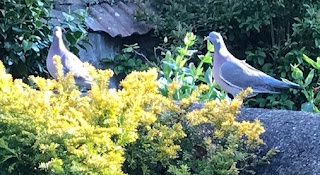 I'm much more aware now of all the birds in our garden.  Two in particular loom large, partly because they make a lot of noise and partly because, well, they're large.
They started to assemble a precarious pile of twigs just below our bedroom window but I think were put off by my regular opening and closing of it, so they moved into a nearby shrub.  When I referred to their noise, it wasn’t just that repetitive coo-ing, but the clattering as an unwieldy bird emerges.  It alights a few yards away on the path where it walks awkwardly, as if in the wrong element, managing to look both aimless and purposeful at the same time. Then there’s two of them.  After a moment, they’re up on a branch, making a fuss.

I’ve written before about anthropomorphism.  I can’t help but see this pair in terms of ourselves, with their behaviour so reminiscent of our own.

And similarly all those other birds who live and have their being in the same place as we do – their various actions and reactions inevitably get interpreted similarly.

A Pair of Pigeons

placing his feet, stretching his neck,

Not far away is old Mrs. Willoughby

a boat out of water, twisting and turning,

ready to flap off, clapping her wings.

A crowd of rowdy rooks are wrangling,

little wren is busy at work,

brown thrush proclaims from high above

and blackbird has children to feed

while old Mr. Willoughby toddles along

flicking his eye which seems not to see me,

Not far away is old Mrs. Willoughby

inspecting the ground, peering and stopping

as if she were doing her shopping.

Robin pops up if anything’s happening,

the gulls have dropped by for a bit of a break

and bullfinch pulls at the buds.

But old Mr. Willoughby totters on by

pecking away, helping himself,

Not far away is old Mrs. Willoughby.

They leave with a clatter. Up there in the tree

the pair reappear, stroking their wings.

I wrote about anthropomorphism in an earlier blog. It’s writing for children that’s interesting me now.

Naturally many a children’s story uses anthropomorphism. For a start. there are all those Nursery Rhymes and associated tales, with animals and other creatures acting like humans – you know, pigs building houses, a wolf pretending to be a Grandmother, bears cooking porridge, a serenading owl, an unhappy walrus wondering how to clear a beach of sand, and a tortoise racing against hares.

Whether it’s Aesop from the sixth century BCE through Uncle Remus in the nineteenth (who himself drew on ancient African folk tales, no doubt as old as Aesop), to Beatrix Potter, T. S. Eliot and so many others in our day, countless poems and stories from long ago right up to the present feature talking animals.  They’re often clothed like ourselves, involved in human activities ranging from going to school or working, cooking and eating, recreating (as my American cousin would say), or travelling – even to indulging in formal warfare, as in The Wind in the Willows, or Watership Down, which I’ll come back to.

Of course, such humanoid creatures are not confined to children’s stories.  Or perhaps one might say that such stories with their human animals appeal as much to adults. Reading out loud and recording Watership Down during lockdown to send to grandchildren gave me much pleasure: if they enjoyed it half as much as I did, they’ll have had a wonderful experience.

So the question arises – when is a story or poem one for children?

Clearly, some with their minimal words, simplified pictures and cardboard pages aimed at very young children with their very limited vocabulary and attention spans are so unsophisticated that the answer is obvious. But the best imagined and written ‘children’s’ stories – like some of those I just mentioned – break free. Perhaps you even have to be a grown-up (whatever that may be) fully to appreciate them.

What then about ‘adult’ stuff?  Probably, for a start, many a poem speaks, if not sings, as powerfully to an open-minded child as to an analytical adult, though obviously Waiting for Godot and The Windhover will go over their heads.  Well, perhaps...

And so back to Mr. and Mrs. Willoughby – a little poem I meant to be for children.

Here for example, I originally had the rowdy rooks waving their order papers, but changed it to wrangling, intending to make it more comprehensible.  Perhaps it doesn’t make any difference – really doesn’t matter.  Anyway, with its alliteration, it goes better.

I ended up thinking that a poem shouldn’t be edited to make it appropriate for children – the poem has to emerge, like a Willoughby, in its own way, clattering if needs be.

Having the pleasure of being included in a recent anthology for children from the Emma Press on Insects* stimulated some of these thoughts. Here are excellent poems, many written in the first person, deliberately jokey, strongly rhythmical and rhymed, which pose questions while managing at the same time to be informative.

Which explains why I was uneasy that mine didn’t seem to be a children’s poem. But after reflecting that it had after all been included, that there were also poems which were more contemplative, and children can of course feel nostalgia and comprehend loss, destruction and abandonment as much as adults, I felt differently.

So, yes there is writing for children, especially small children.  And for people who’re no longer children.  And across the middle, an overlapping swathe, bigger than I thought.

I’ve just been out to take a photo of them, but no sign of the Willoughbys now when I want them.  Perhaps they’re looking after children of their own – even, who knows, reciting a poem or telling them a story…

*The Bee is not Afraid of Me