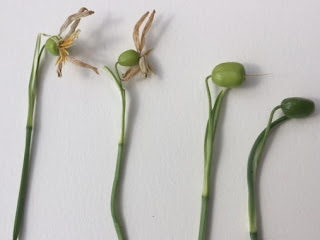 As March gives way to April, I feel a sadness.

This is when the snowdrops – so eagerly awaited, so welcomed – shrink, fade and disappear.  The flowers, I mean.

But the plants remain, growing and nurturing.

White dresses are for early days –

the young and aspiring call for petals,

and unseen, the task is accomplished.

business begin.  Now is the time

what was not noticed – a green globe

twist, dry into straw and

Perhaps it’s because they’re the first flowers to appear, and those little green spears which thrust through everything nature throws at them – leaf litter, mud, snow, even an unwitting booted me – seem bravely indomitable.

Interesting to see that word – brave – breaking in.

So we anthropomorphise, ascribing courage (the quality we assume we would need, were we them) – to these plants which are doing no more than following their natural cycle.

And yet… Fair Maids of February, maybe there’s nothing wrong in that.

Is it the way they hang their heads (there we go again, even as we describe them) downwards, implying modesty?  And so the milky white snowdrop has come to represent purity and virtue, along with sympathy and hope… fair maids indeed.

Perhaps a degree of anthropomorphism, inappropriate as it might be, is inevitably a small but essential part of a compassionate response to nature?

So, with the passing of March, and despite the bursting of primroses, periwinkles and celandines, for better or worse, I gently – and at least slightly anthropomorphically – mourn their passing.

Naturally, all flowers are not only short-lived, but have a job to do.