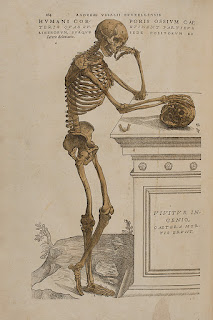 I’m a thoughtful body, you can see

dear skull – you were once joined up like me,

recognised and speaking.  Now not a trace

of all that made your well-known face –

no flesh, no skin, no lips or tongue,

no lungs or breath to sing a song –

although you cannot shed a tear

can you tell me what’s to come?

Dear alter ego, I am dumb

as you remarked.  What can I know,

a disconnected skull?  So,

live in the present, which is where

you find yourself, and do not care

about the future.  What I heard said

came from inside my empty head –

but I think I can’t think that I heard

since I can’t hear or say a single word.

Halloween – the time of year for skeletons.

Strictly speaking, Hallowe’en – Hallows’ Even or Hallows’ Evening – is October 31st, the eve of the All Hallows’ Day, and we’re now into November.  But the festival, if that’s the right word, of Allhallowtide runs for three days.  Here then, with no apology, is my talking skeleton.  Well, Vesalius’ construction.

As with Halloween itself, there’s a paradoxical mixture of reactions to skeletons.  On the one (bony) hand, we find fascination – many finding themselves attracted to this curiosity, with perhaps a touch of underlying horror; on the other hand, irreverence and humour tends to bubble up, not an unusual response to such a direct reminder of our own mortality.

Vesalius must have been conscious of all these facets.

His skeleton stands elegantly, weight on one foot, head thoughtfully supported, with his right hand gently rolling a skull across what looks like the table top of a memorial grave.  The skull’s jaw has fallen away (which they have a habit of doing, unless they’re wired on), suggesting that speaking for the separated skull has become impossible.

At which point in the discussion, one realises how preposterous the whole performance, with all its underlying assumptions – starting with a standing skeleton with no muscles, ligaments or tendons to hold it together – has become.  There’s certainly a sense of humour displayed by the sixteenth century physician and his artist, alongside a seriousness of purpose – not just to display authentic anatomical details, but also to reflect on aspects of mortality, and raise a wry smile (if you’ve got a face).

All of which stimulated me to put some words into these two heads – to imagine a conversation between this cogitating full-life (so to speak) skeleton and a separated skull, which tells the other to live in the present. Particularly absurd is the former’s sense of superiority: being a totally intact skeleton, this assemblage looks down, albeit slighty sympathetically – ‘dear skull’ – upon the addressed skull, under its caring hand.

I wanted to rhyme this poem, conscious of the classical image with its traditional associations, and tried to emphasise the link between the two ‘speakers’ – neither of whom can speak, nor even have an identity – across the stanzas, using rhyme.

And similarly, with all the latin, I wanted to include some latin words as well.

I also felt there was a need for symmetry; that despite the full skeleton’s integrity and stature versus the isolation of the solitary skull – each participant should have equality, so the stanzas are the same length.

As for the thinking – let alone any meaning or conclusion – here is only non-communication and confusion, not to say nonsense.  Well, what else can be expected from a skeleton and a skull, which properly are no more than a pile of old bones?

Vesalius succeeded in producing an almost complete skeleton (though missing both hands and one foot) from a convicted felon, one Jakob Karrer von Gebweiler, but nearly every other exhibited complete skeleton (apart from freak giants and dwarves) used in teaching are mixtures – you could call them miscellaneous.  In Our Mutual Friend Dickens describes Mr. Venus:

‘When I prepare a miscellaneous one, I know beforehand I can’t keep to nature, and be miscellaneous with ribs, because every man has his own ribs, and no other man’s will go with them; but elseways I can be miscellaneous.  I have just sent home a beauty – a perfect beauty – to a School of Art. One leg Belgian*, one leg English and the pickings of eight other people in it.’

*Is it just coincidence that Vesalius was Belgian? 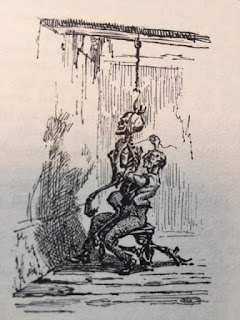