The Barn Owl, Samuel and his pot, and me 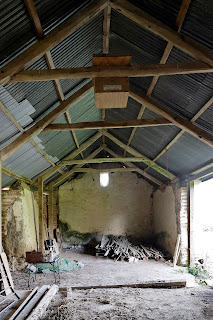 I thought of the barn

as mine.  But as she lives there

it belongs to her

I’ve been reading Samuel Menashe’s poetry. His most famous poem is even shorter.

A pot poured out
Fulfills its spout.

The distinguished academic Christopher Ricks spends several pages poring (sorry) over this wonderful poem, pointing out all sorts of poetic techniques in play, and indeed the more carefully and the more often one reads it, the more there is to find – that pot just keeps on pouring.

For example, it’s not the pot – it’s a pot, which is worth thinking about.

Similarly, the American spelling of fulfills has something extra to say about a full vessel; not to mention the alliterations, sound play, rhyme, internal symmetry (each line of four syllables perfectly balanced, as you’d expect from a pouring pot) and the sharing of contents (that pot’s ‘ot’ moving into the ‘o-t’ of out and thence finding its way into, or should I say out of, ‘spout’ – having re-found its ‘u’).

But this is not the place, nor did I want, to deep read someone else’s poem.

Rather, it was to explain how I came to want to write as short a poem as I could, to pack all that I wanted to say in as few words as possible.  And I wanted to say quite a lot.

The 5-7-5 of the haiku came to help me. As with other verse forms, here was an encouraging and supportive structure, well-used by so many poets over so many years. Of course, my poem doesn’t fulfil (sic) the strict criteria of the haiku, but the shape and in particular the line breaks brought something special and I felt a sort of an undercurrent assisting me…

First, I wanted to say that I thought of the barn: simple as that – I often think of my/our barn when I’m away from it.  But I’ve used thought, not think.  That part of the poem is in the past, is elsewhere; the rest that follows is in the present tense.

Yes, the barn – not any old barn. Ours is half ruined, half dark – though often shot through with bright bars of light – with various piles of our bits and pieces in it.

Which brings me to my next thought – the first person: it’s mine/ours. That’s how I thought of it.

But it also happens to be someone’s home – someone who rests, sleeps, digests, excretes, brings up their young and has their being there.  Doesn’t that confer a sense of ownership far greater than my claim?  I only ever spend an occasional few minutes in the barn, and days can pass when I don’t go near it. So I was interested in the concept of ownership, and how our/my concept of possession is so limited – and unthinking.

The tiny word as is intriguing – powerful and ambivalent.  I’ve used it twice in one line, conscious of its several meanings.  The first time, it means that’s how I think of it.  The second, it means because, but also since, in a temporal sense.

As (sorry about that) for the next word – she… somehow, with all that nurturing and its preceding egg laying, it had to be she.  I spent a long time wondering about that word.

As (sic) I did about many others in this poem – like there.  Would here be better?  In that I wanted to suggest I wasn’t actually inside the barn at the time I thought about it, there seemed more appropriate. Besides, that word actually contains here.

In keeping with the brevity of the poem, I wanted to use only short words (and the barn owl is actually a surprisingly small creature under all that plumage). There’s only one two syllable word, which is belong – a word I mulled over; I liked the ‘b’ – I’ve got one in each line – and the ‘long’… well, it just belongs, the barn being very old.

Time now to stop, and resist the temptation to talk about the rhymes – or anything else that’s too clever by half.  Enough to say I spent a long time on this tiny poem – like that famous quote (attributed variously) of apologising for writing a long letter on account of not having the time to write a short one – in an attempt to follow the inspirational example of Menashe.

Concluding now, I’m struck by my writing this present gloss on a poem of mine, which has turned out to be one of the longer on (definitely) the shortest.

I’m amazed how Menashe found the time to write all those very small poems.

But he did live to be very old… like my/our/her/the barn.