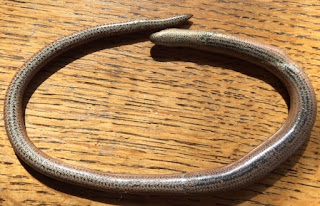 I didn’t hear it either.

An electric strimmer’s got a lot going for it – as opposed to my petrol driven one, with its noise, vibrations and fumes.  But that very silence can be a killer too.

My eye was caught by a flash of metallic sheen. There amongst the grass trimmings along the edge of the road was a beautiful torque.  I bent down and picked up the silky smooth, still warm circlet which I could wrap round my wrist.  I stood for a moment, wondering whether to show this discovered treasure to the strimmer up on his bank, but he was focused on his work, and what would have been achieved?

Instead I called out good morning to him – which it was, the slow worm no doubt also enjoying the unexpected warmth of the sun a few minutes ago – and slipped the compliant creature into my pocket.  When I got home, I laid it out on the table, admiring the different colours of its two sides, the ease with which it could make different shapes – letters and numbers – and the attractive face with its quiet half smile, well compared to Mona Lisa’s.

I read in my Beast Book for the Pocket how Man is first amongst its chief enemies, even though it’s ‘absolutely harmless and wholly beneficial to Man’ and it’s ‘not particularly slow, but rarely in a hurry’.  Edmund Sandars went on to make a succinct comment – ‘Voice. Nil.’

The words. Anguis fragilis – I rolled the name around, gently turning the creature over.

My poem tries to celebrate, perhaps even revere, this ‘beast’ who’d shared for a while the fresh summer morning with me.  My efforts at representing it visually aren’t successful: it’s too broad, and completely fails to convey the slim elegance and flexibility.

But trying to capture something of the spirit of this beautiful creature, made me look closely, learn a little and, well, reflect on life and death.

And feel reminded of how ignorant one is of the consequences of one’s actions.