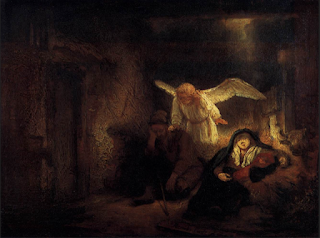 How can this be? It seems as if

he gives out light.  Can this be mine –

is he the child that’s just been born?

I find it hard to understand

So I ask the animals –

did you see what happened?

Why has the darkness disappeared?

What is this strange new light?

Has someone come to visit here

while I was fast asleep?

I’ll never know the reason why

a simple carpenter dreaming on

in the dark before I wake

wondering what a father is,

then woken by a feather touch.

What is a father?  I don’t know

everything seems so long ago.

Of course, he’s ours

and they are gone, leaving us

with our brand-new shining child.

Not much seems to have been written about Joseph.

Nor, come to think of it, the feelings of any new father, presented with – even confronted by – his new-born child, especially when it’s the first one.

As for Joseph – I'm not sure why he’s an old man.  Perhaps that fits better with the idea that he wasn’t the real father?

Nor am I sure that the documentation actually says that he’s old. But that’s the conventional way the story’s told and depicted, and right now I’ll go along with the traditional telling of this tale, accepting the story and not worrying about ‘truth’ – whether it really happened.

To be sure, old or young, becoming a father is a strange business.

To start with, the nine months ago event that preceded all this feels a long time ago – ancient history almost. So much has happened since then. Then there’s the birth, which he may be involved with, but that’s really about other people.

It may sound silly to ask where it came from, but every new father’s left wondering: he feels a sense of the extraordinary – something astonishing has happened – which could be thought of as little short of miraculous.

Poor old Joseph must have felt exhausted too. He’d have fallen asleep, no doubt dreamed.  Maybe that’s when, or even how, many of the well-told events in the story took place.

And then the baby, a shiny, brand-new baby, would have woken him up to a new day, a new world.

Like many babies, his (yes, his) radiated warmth – perhaps even light. No wonder that this particular bewildered father felt the need to talk, to ask some questions.

Who was around? No one at the moment, though various assorted people were to come and go. The silent cattle might well have been as good as any to turn to.

So there I leave this father with his unanswered questions.

A father not much thought about, being incidental, peripheral, to this (literally) wonderful story. But a father who being there, must have felt emotionally confused and full of uncertainties and unknowns.