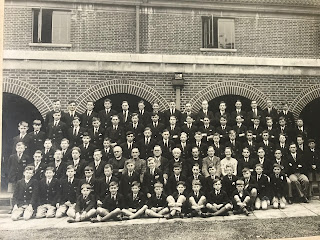 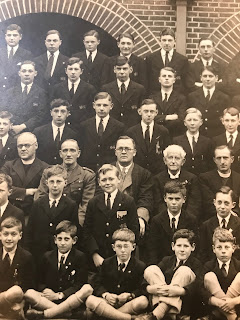 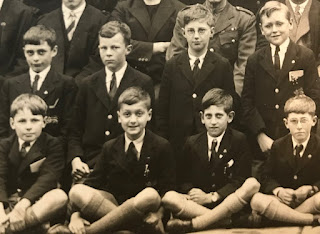 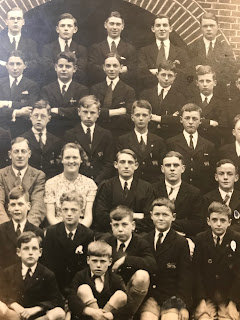 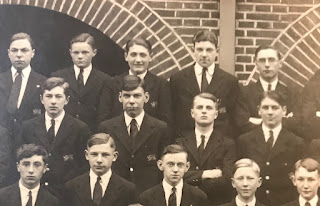 School Photograph from the late 1930s

Begin at the bottom, for here are the youngest

pens in top pockets – the curious and eager

bemused or amused – all looking forward.

Above, they are older, kneeling uncomfortably

to increase their height. Ascending

we come to the staff who are seated.

Central, the Principal, white-haired and shrunken,

pressed in by a burly begowned headmaster

and that dog-collared pair (do they all wield the cane?)

while a military man simply stares straight ahead.

Here’s a broad-shouldered fellow, the only one smiling

who must be games master.  Beside him, off centre,

Up to the fourth rank – older boys now,

each with lion passant over his heart.

The fifth are stacked up, facing their future –

watts and gerundives – they’ve conquered them all

by the time they’ve arrived at the sixth, now promoted

Behind them lies darkness under brick arches.

Before, a world war awaits this arrangement

where all is in order, before general dispersal.

How familiar are photographs like this! Well, certainly to my generation.

We can all remember the preliminaries – hair brushing, clean shirts, polished shoes; the summoning to the array of benches, chairs and staging; the placing; the commands; the large camera and active photographer, never quite satisfied…

And the resulting black and white image, mounted and sometimes adorned with the institution’s crest. The photograph was an expensive item, often framed and hung proudly; but with the passing of the years, stacked away somewhere, to be forgotten.

Thus I encountered this one, stuffed in a pile of old family papers – unnamed, undated, untitled. Actually, I’ve worked out, recognising my great grandfather, the school, but somehow that doesn’t much matter, as it’s the generic quality of this picture that resonates.

The eye passes from one individual to another, half recognising faces and postures from one’s own memory – the boys, the types, the masters...

This photograph is so like so many others, yet each face is unique, every person an individual with character revealed – more or less – as they present themselves on this particular day.

At first I thought it’d be helpful and interesting to know, but from my ancestor’s appearance revealing his age, the general style and wearing of clothes and the overall flavour, I didn’t find it too difficult to make an informed guess.

But that too doesn’t actually matter very much.

What is significant is the realisation that this display of Liverpool College boys and staff has to be just before the outbreak of the Second World War.

At least some of these spruced-up boys soon will be mobilised, some injured, a few killed; all of them will have their lives with their many plans and anticipations, seriously disrupted.

What happened – or will happen – to this particular boy? And this one? And the next?

We will never know, just like they themselves presently cannot know.

Photographs have this extraordinary ability to mix past, present and future.

Here in this picture in the scoffings and scowls, the surprises and half smiles, the quizzical and the straight gaze, is the undeniable present – they all live in the immediacy of the captured moment.

Yet all are now dead.  All of this is emphatically past, although everyone – each face I scrutinise – has a future, unknown to them, as all of our futures are.

And there I go, using the present tense as I assess them in the present, in which this photograph enables them to reside, although everyone is most definitely past.

These ruminations on an old school photograph seem appropriate for this month of November, with its various associations – autumn, remembrance/Remembrance, and of course death itself.

But I’m left with a feeling of consolation. The very presence and my recognition of these young (and older) people in all their variety represents life itself – they are here for now, before being scattered by whatever awaits them in the darkness of those arches.

They’re just like us.  Or what we used to be. So in a way, perhaps I’m there as well.

Meanwhile, life goes on, with past, present and future blended.

And soon enough the photograph will get shoved back into a drawer of family memorabilia. 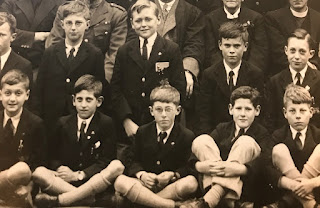