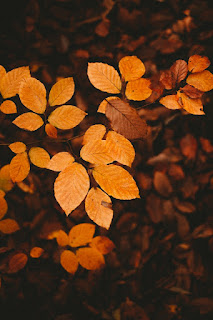 September has always felt like a time of beginnings and ends, of arrivals and departures.

During all those long childhood, and later young adulthood, years it was the start of the new year – new lessons/courses, new teachers/lecturers and new places to have to go to and get used to.

And, naturally, it’s a new season – the start of autumn.

At the same time, it's a time of endings.  The end of the long summer break, of holidays and freedom; the end of what one’s got used to, of whole patterns of living.  Now is the time to pack stuff away, to decide how to leave things and – if away – to go home. The end of summer, no less.

My poem focuses on departure – an imagined departure, in a very specific context.

The Officers’ Mess at Theresienstadt

The curtains still hang there half drawn

since they left in a hurry that morning.

Everything else they took with them –

the gramophone, records, and group photographs,

carved crests of the regiments painted on shields,

leaving their various shadows.  And the pictures –

those views of the mountains, that Jaeger and dog,

the fairy-tale Schloss and yachts on the Rhine.

Perhaps it was evening when the young Leutnant

stood up from his packing behind the drawn curtains

to consider his question.  Yes, he would leave them.

He turned on his heel.  Then returned.  Should they be

open or closed?  Now there was nothing to see –

nobody inside enjoying companionship

nor anyone outside.  Rubbing his back

he decided to leave them there hanging like that.

I’m not sure in which month these particular men, who for the most part would have been quite young, found themselves packing up, but the occasion has a September feel. Whether they left things until the last minute, or whether they had a bit more time, there would have been lots of decisions – none actually that important in the circumstances.  Really, it didn’t matter if the curtains were drawn, left covering the windows or not, but for the individual concerned, the last person to leave, perhaps it became important.

And in a way, so it was.  Curtains of course give privacy by stopping people looking in, retain warmth and contribute to a feeling of togetherness.  Even protection.

On the other hand, when drawn back, daylight enters, the inhabitants can see and enjoy the outside world and be themselves seen.

But now everyone had left – no one to see or be seen.

In this instance, this particular moment of departure, for this young man who'd been lugging packing cases around, a definite end of much more than a season.

Certainly, a wonderful new beginning for those who had been, or were still, outside.