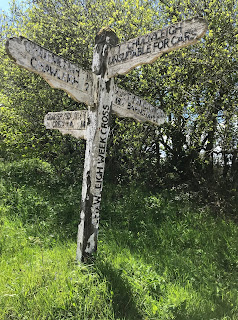 Here’s a signpost – originally distinctive, being unique and handmade, and now even more so, with the evidence of ageing.

While all signposts are interesting in their duty to inform, their presentation of choices and their simple declarative presence, I find this one special.

It’s not just that it has much to say in terms of where you actually are, in which direction you might choose to go, how far your destination is (down to quarter mile accuracy) and even if your chosen method of transport is suitable. It’s also special in the simple elegance of its design, with the arms’ supports and the bevelled edges of the main post rising to that unexpected point.

But the specialness goes further.  My friend James Ravilious took me there just at this time of year, over twenty years ago.  It was then upright and brilliant white, with crisp black letters. He certainly thought it was special, photographing it lovingly, in May 1988 (Chawleigh Week Cross – Beaford Archive.)

His close observation encouraged me to pay attention to it, and to remember it.

So I found myself returning, to find a signpost showing serious signs of the years passing.

to show you the way, two lines of letters

borne by each arm. You have arrived

by the way, here at Chawleigh Week Cross.

along with their numbers, tell you in silence

where you can go, and how far it is –

right down to the halves and the quarters.

To go to Chulmleigh, travelling by car

Stand and consider – the choice is yours

having arrived at Chawleigh Week Cross

which way you’ll go nor how far you’ll travel

nor am I sure about my choice.

The last time I came the signpost was clear

now places and distances have blurred with the years

letters are heavier and what is beneath

begins to break through. But thanks to the sign

I still know where I am, here at Chawleigh Week Cross.

The years roll by since James died. I find myself counting... how many?

The numbers pile up – one becoming the next, like digits on the microwave screen, the taxi’s meter or my bedside clock.

These numbers on the signpost are all quite modest, though 18¼ is a lot more than the only 1¼ to Chulmleigh.  Still, Barnstaple is important round here – you need to know how far away that is.

Odd numbers, even numbers… even uneven numbers. Round they all rumble.

Round numbers – those that end like ten, with a 0.  But also perhaps particular numbers invested with special associations and significance.

Ten’s obviously the first, with its growing-up marked by it being the first double number.  The next might be 25 – perhaps because it’s half-way to the magic fifty. Somehow, fifty really is a Round Number.

Be that as it may, this is where I come in, for this is my fiftieth blog.

Of course, there’s nothing special about that.  In fact, there’s a certain inconsequentiality in numbers. No one, including me, would ever have known, had I not been counting. So, it’s a So What?

But there it is, like Chulmleigh, Chawleigh, Eggesford Station and the rest, a counted number –  invested or not, as the case may be, with significance. Meanwhile, I’m enjoying thinking about those quarters and halves of the signpost and the variety of places and their names; and find myself happy to move on from this particular round number, with a wide set of choices before me.

Like the traveller who arrives at a signpost – even, or especially, an old one showing a bit wearily its signs of ageing – whose four arms (still) offer a great range of choices, in every direction…