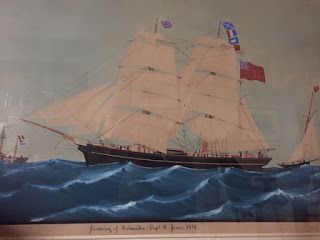 Full sailed, running, proceeding well
all-set aloft, the boy at the wheel,
prospect of fish from your line at the stern
and the mate fast asleep in his bunk?

Or only a jib and the driver
with a couple of staysails drawn tight,
almost hove-to – all straining
through a storm that lasted the night?

Maybe a soft sea lapping the stemhead,
canvas bellied, as if all satisfied;
galley door open, binnacle gleaming –
just a wisp of a cloud in the sky?

Or waters that gush through the scuppers,
the steersman roped into place,
restless ballast rumbling below decks,
screams of a gale in the rigging?

Fair or Foul – you’ve only to choose –
I paint both of them equally well.
As you stand with your foot on the fender,
the little ones hearing your words

it may be serene days of ease,
breezes and translucent seas
you’ll want to describe. Or
when crashing through tens and elevens

captain and crew together were challenged
but all showed their mettle, and came through
the weather, one way and another
to find their way safely back home.

The painting hangs beside me as I write, with its blue ridged cardboard-like sea supporting an immaculate sailing ship. This is after all, a portrait – everything needs to be shown to its best advantage. All sails are set, each one perfect – not a trace of discolouration, nor a patch to be seen – the Upper Topgallants billow picturesquely, her four name flags fly with pride and a magnificent – surely rarely flown – Red Ensign flutters from the Mizzen.

Her crew of six little bobbin men, armless, anonymous and standardised have been placed on deck, the Mate is at the wheel and the Master, thirty four year old Captain Owen Jones, looks ahead through his telescope on that sunny day in the North Sea in 1884.

All of which is of course a fiction.

The artist would never have been beside the West Hinder lightship in that optimal position, broadside on, to sketch or draw, let alone paint Fleetwing as she passed by on her reach, nor would a pilot boat be tacking at that very moment so conveniently past her stern, nor would all the crew be on deck, standing at the ready, on such a favourable day.

No – all this was imagined, assembled and created by the artist, one De Clerck of Antwerp. He was a 'pier head artist', a so-called Sunday painter. His was a practical, popular art, probably self-taught – he may well have been a sign or carriage painter the rest of the week. But captains, owners and crew members enjoyed having a memento of their ship to display with pride.

And so ship portraits were commissioned.

Sometimes – perhaps if finance allowed – a pair was painted. Fair and Foul enabled the ship to be seen not just at her very best, but also coping with the worst, for that's what these ships could do.

I don't know if there was ever a matching Foul to my Fair. Probably not. I can understand that Fair would have been first choice, but I like the idea of the artist asking the commissioner if a Foul was required – along with that tradition of presenting both. And I also like to be reminded of the pairing: that both exist, that each is necessary, that they need each other in a curious symmetry.

(Perhaps frivolously, I wonder whether other portraits – those of individuals – might be the better for including a Fair and Foul?)

Much might be said about Choice, but I think I'll choose to let that rest.

But I do want to mention how agreeable it is to use some of these old sailing words.

Clear, technical and real – unlike the fiction of poetry and idealised paintings.

I'm not sure why I choose to write poems, though (I think) I know why a painter was asked to paint a picture of a handsome brig.

So I'm left reflecting on the creation of fictions: the need for them – whether they happen to be words and stories, or pictures.

Fiction... artefact, let's pretend, we know it wasn't really like that, that it never actually happened, but it's what we'd like to go along with.

Fiction... the lie that tells the truth...

So I leave you with me, the poet, describing with a spurious accuracy what Fleetwing's crew were doing at various times, which never took place; along with the imagined sales pitch of a Belgian artist to a Welsh sea captain, which also might never have happened; and an artist painting a particular moment in the North Sea as if he witnessed it – which not being the case, he conjured up.

Happily, whoever commissioned this lovely painting – but drawing on the privileges of the artist/poet, I'll say was Captain Jones himself – did in fact proceed, asking for the Fair, which I'll tell you hung over his mantel, being the subject of many a fascinating yarn for his grandchildren, one of whom gave it to my grandfather from whom I inherited it.

The truth of all of which is no more and no less than that of my poem, and the portrait of Fleetwing sailing so elegantly past the West Hinder Lightship one day in 1884.