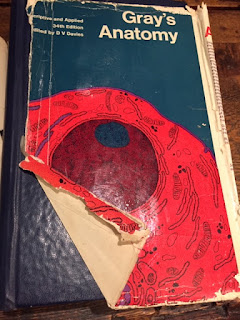 Begin at the beginning, with the fertilised cell
from which originate all tissues and organs.
Biblical, it lies open at the lesson for today,
revealing that which is contained within
to whomsoever would study this still life.

My finger glides across the glazed page
following vessels of red and blue, criss-crossing
in their travels.  Tributaries may be traced
like roads or rivers, with accompanying prose –
for it is preceded near its insertion by the second,
or first and second, perforating arteries.

Light streams down its old familiar course
to pour upon a clean tiled floor.  No dust here.
Porcelain gleams, steel shines, even the page
reflects.  Little chained grapples draw back tissues
to display the obscured – if not otherwise clear
there are figures and diagrams, photos and pictures
offering views from every angle. Here you see
both hind and midbrain from the postero-lateral aspect
with specific reference to rootlets of accessory nerve
and of course the tuberculum cinereum.

Sounds resound as in a swimming pool.
My nostrils prickle.  Running water’s running
somewhere. Structures pass, sometimes laterally –
there is much communication, but please note
outlying lymph nodes in the upper limb
are few in number.  These we never found
although distinct upon the page, littered with latin
nomenclature and titles. Reaching deep
into preserved history, attached by a broad base,
to emerge under cover of lateral pterygoid,
the nerve proceeds downwards.  And will continue
through many editions and soft sliding centuries,
while organs remain in their beds. The junctional area
between archipallium and neopallium has cortical forms
with four or five layers of cells, those zones of transition –
is this where knowledge was once stored?

So much is lost, like unmourned cells.  Time passes
with the turning of the formalin pages, I proceed
from Histology to Syndesmology, thence
Splanchnology, via Sensory Organs
at last to arrive at the triple columned index
where all is finally gathered in.
Then by itself the great book falls shut.

My edition of Gray is certainly a great book, weighing in at over 3 kg, or should I say 6 ¾ lbs? It seems appropriate to use lbs, as if it were a baby.

And it is a bit like a bible, not just in its weight.
The serious tone, characterised by long sentences with many an appended sub-clause, and vocabulary (alluded to by my ‘whomsoever’) with words such as stout (meaning strong), salient and arise, phrases like inseparably blended, and the dark blue end boards – all contribute to this impression.

And so, as it begins, I was reminded of descriptions of beginnings – of Genesis, of the dawn of creation, of the moment when Under Milkwood starts, before dawn – itself bible-black…

Of course, this was all a long time ago: it’s over fifty years ago that I bought – for 160/- NET (that was a quaint way to price a book even then) – my brand new, only just published, 38th edition Gray.

Allowing it to fall open where it will, I now let my finger and mind wander across maps and descriptions which were once laboured over in an attempt to commit to memory.  This time, I find myself not worrying. The structures resonate, but more lively are the memories of the sights and sounds, smells and sensations which all come rushing back, mixed up – or better stated, inseparably blended.

The names themselves – those wonderful latinate words, again reminiscent of religion – roll forth once more.  I speak them out loud, enjoying the sound.

And recall the incompetence of the student, forgetting the proper names, not finding the sought-for object, losing the thread, getting lost.  Meanwhile, the Great Authority rests assured – certain, confident and correct.  Everything – hard and soft organs, tiny structures and gross bags of uncertainty – all that anatomical jumble, the mass – or better, mess – of pipes, lines, sacs, cords and bones – is described, ordered, drawn, displayed and tabulated into systems which are themselves logically sequenced, each subject connecting to the next as pages turn, leading finally to that impressive omniscient index.

I don’t apologise for that rambling, baggy sentence – it’s meant to reflect the subject.

Which brings me to writing – the poem itself.

I’ve tried to construct a heavy block of text, cluttered with latinate words (bearing in mind that Anatomy was written in Latin), meandering between science and sensation, clear thinking and confused memories, my own student youth and the present detachment of retirement, with its own increasing awareness of impending mortality.

I don’t think I’ve hung onto anything else from those medical student days.  But Gray, like a family bible, has followed me through many a move and a long and varied professional life.

What power a book can wield!
Bulky, battered and I’m sure now obsolete, my Gray with its torn but retained cover has succeeded in staying with me for a half century, even though I can’t think what use I have for it.
Unless it stimulates a poem…

Now closed once more, it’s gone back under the bookcase, where it lives. 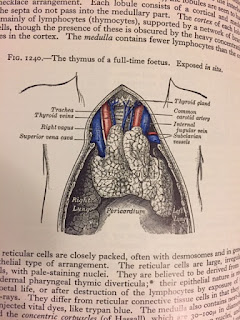