Of course, much isn’t – at least obviously.  Many a huge oil painting is closer to drama – perhaps even better, opera.  Most portraits are more or less representational, especially in pre-photographic times.  Landscapes are records, as are Still Lifes…

But realising that all these may have emotion imbued or expressed, indeed that the very reason for painting or drawing is to offer a unique individual’s point of view, I appreciate that I’m arguing against myself.

Still, when pictures strive to be succinct and every line has to count, when a whole story is told with deceptive simplicity, when so much is expressed in a compressed form and when there’s an acute awareness of a sense of balance, harmony, even rhythm (I can’t pretend rhyme has a place in visual art) – well then they share much with poetry.

And none more so than Hans Holbein’s sequence of The Dance of Death.

41 tiny images – each no bigger than a match box – depict Death in the form of a skeleton, calling on all manner of people, from Kings, Emperors and the Pope himself through to a peddler, ploughman and little child.

Death assumes many moods ranging from haughty to humble, from satirical to seductive, from friendly to ferocious.  He hands the Physician a flask of urine, helpfully plays the drum to help the Lady to dance, chats up the Empress, upstages the Preacher, pours the King another drink, helps himself to the Miser’s gold and sweetly fastens round the Countess’s neck a necklace (which happens to be made of little bones).

So, like poetry, these miniature woodcuts encompass all human life – and death. Although cut in 1523-6, they have a poetic, Shakespearian universality and relevance.

My present choice shows an Old Man who’s given his hand to Death.  Accompanied by music from Death, he chats quietly looking into the distance, quite oblivious to where his next step will lead him.  It’s a companionable scene.  But the clouds are scudding fast, the sands of time are running out in the tell-tale timer and the old chap is about to tumble into his open grave.

Unlike many of the images, Death’s expression is uncertain here: it might be kindly and considerate, deceptive, even mocking – resonating with poetry, there’s ambiguity.

Before I present my own little piece, I have to add a postscript.

It’s curious that Holbein (or perhaps it’s down to his engraver, another Hans, one Lutzelburger) had such relatively poor knowledge of the skeleton.  I’d have thought that in the sixteenth century people would have seen human bones, so that Death’s shoulder, elbow, knee and ankle joints would have been more accurately drawn – not to mention the ulna, tibia and patella, which are all absent.

Not that such discrepancies matter much, for Holbein’s Death is a most convincing character.  And maybe ‘Art’, like Poetry, has less need to be totally accurate, than powerful.

Step this way, Old Man – I’ll play
the unseen guide who leads you
gently by the wrist, Kind Death
conductor and accompanist
whose bony fingers pluck sweet sounds,
dancing on the dulcimer,
while you Old Man can only stumble
turning your heavy head aside
from what awaits, as clouds roll by –
whispering still of distant days
and long forgotten songs.
I have touched the last string now
and you have reached the final bar –
just one more step before the cadence
which precedes the silence. 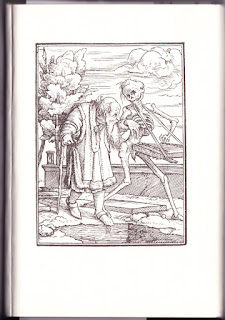